Like a seat belt, child safety seats or often called car seats and booster seats are considered as the passive safety systems in a vehicle if installed and used correctly. They do not prevent crashes from taking place but they can prevent injuries & fatalities by reducing the severity of injury to vehicle occupants involved in a collision. An occupants’ chance of survival increases dramatically when appropriately & properly restrained.

So, how exactly do car seats, booster seats, and seat belts prevent injuries?

KEEPING PEOPLE IN THE VEHICLE

The safest place during a crash is in the vehicle. Occupants being thrown out of the vehicle not only experience the ‘three crashes’ explained in this article, but also faced with potential crashes by passing vehicles or objects like trees and dividers. 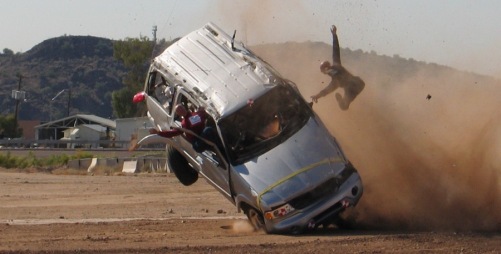 Car seats, booster seats and seat belts are designed to contact the body at the strongest parts of its structure. For an older child and adult, these parts are the hips and shoulders where the seat belts supposed to be positioned.

SPREAD FORCES OVER A WIDE AREA OF THE BODY

Car seats, booster seats and seat belts are designed to spread crash forces over a wide area of the body, putting less stress on any one part. Lap-shoulder belts and car seat harnesses spread the force across a large area of the body along the lines of the belts or harnesses. For this matter, a 5-point harness is better than a 3-point belt as the area of coverage is larger for the force to spread.

HELP THE BODY TO SLOW OR ‘RIDE DOWN’ THE CRASH FORCES

A quick change in speed is what causes injury. A simple equation for impulse force, F derived from Newton’s second law is shown below to illustrate the correlation between crash force and time.

A rear-facing car seat protects the head, neck, brain and spinal cord from excessive force in a frontal collision by spreading the crash force across the shell of the seat.

A very well designed car seat and booster seat with side impact protection also helps keep the head and upper body away from the hard interior surface or windows of the vehicle. For a newborn child in an infant carrier, the car seat acts like a cocoon that protects the child from the impact.

Using a child restraint or wearing a seat belt enables a child or person to receive the full benefit of the safety features in the vehicle.

One thought on “How Car Seats, Booster Seats, and Seat Belts Prevent Injury”