Most vehicles are equipped with lighting system which consists of: 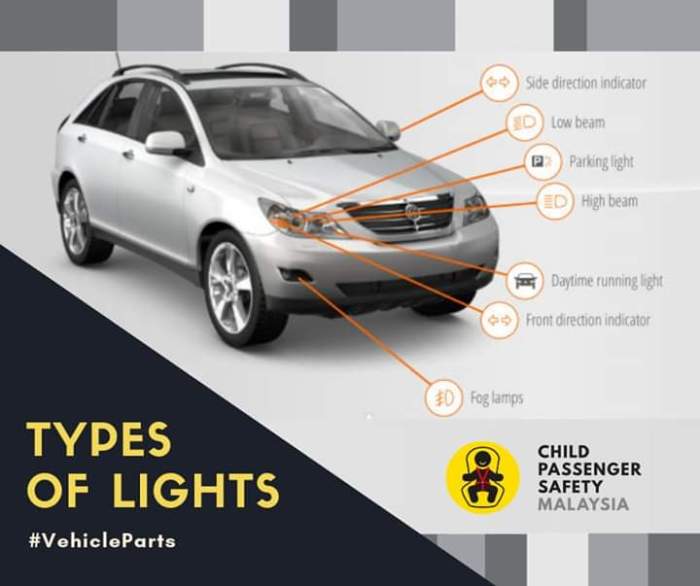 These devices are mounted or integrated to the front, rear and in some cases side or top of a motor vehicle.

Vehicle lights are used as safety features to:

✔️ Increase visibility of the vehicle towards other road users.

✔️ Allow other drivers and pedestrians estimate the vehicle’s position, size, direction of travel, and the driver’s intentions regarding direction (eg. changing lanes, turning left/right etc.) as well as speed of travel (ie. de-accelerate upon braking).

Hazard warning lights are a pair of intermittent flashing indicator lights that flash in unison to warn other drivers that the vehicle is a temporary obstruction/hazard. When your vehicle is broken down on the site of the road or you are changing tires, hazard warning lights should be switched on. In most countries, use of hazard lights while driving is NOT PERMITTED. Plenty of drivers flicks hazard lights on when travelling through heavy rain or fog – this could confuse other road users and become potentially dangerous. Any signalling with side indicators would not be seen by other road users when the hazard warning lights are switched on.

A daytime running light (DRL, also called as daytime running lamp) is an automotive lighting on motor vehicles. DRL is also present in bicycle. This type of light is automatically switched on when the vehicle is in drive, emitting white, yellow or amber light with the main function to increase conspicuity of vehicle during daylight condition. This particularly useful in Scandinavian countries and Nordic region where it is persistently dark during the winter season.

One thought on “VEHICLE PART: TYPES OF LIGHTS”